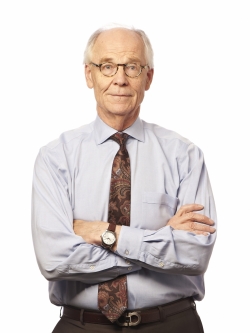 George Larson
“My goal is to make people feel comfortable when making real estate decisions. I offer my clients timely market research with honest and educated advice so they can make intelligent choices about their real estate investment. I don’t mislead my clients or try to ‘hard sell’ them because in the end, nobody wins. By establishing trust and dealing fairly and honestly I have numerous repeat clients. Of these clients, two in particular stand out in that I have acted for them on twelve (12) different acquisitions and divestitures.”
Vice President
Specializations:
Investment Sales
Suite 200, 407 - 8th Ave. SW
Calgary AB, Canada
v-Card

"Mr. Kelly Carver and Mr. George Larson, along with their expert investment team, produced an outstanding and extensive analysis of our properties and they provided an excellent marketing strategy for the portfolio."
H. W. Kujat
President
Estancia Investments Inc.
Read More
"Not only were we pleased with the efficient manner in which you managed the marketing, due diligence and closing matters but also the price achieved matched our expectations."
Darren Latoski
President
Sunstone Realty Advisors Inc.
Read More
"Your attention to detail and constant updates helped make the process both enjoyable and successful. It would be our pleasure to work with you again in the future when the need arises."
Kingsley G. Noel
Principal
Synergy Properties Ltd.
Read More
Barclay Street Real Estate capitalizing on hot retail condo market
Tuesday, February 9, 2021

In the multi-family residential market, condominiums have given way to rental units as more young people and those downsizing look for the benefits of living in new, modern spaces ra

When the late Jack Carter moved to Calgary from Saskatchewan, he opened a Chevrolet Oldsmobile dealership on the corner of Macleod Trail and Glenmore Trail in a brand-new, well-desig

The renewed appeal of commercial real estate investment which took hold in Calgary in mid-2016 has continued through the first six months of 2018, according to a new report by Barcla

<p>George Larson didn’t begin his career in real estate until 1986 after working in banking and lending services for 22 years.